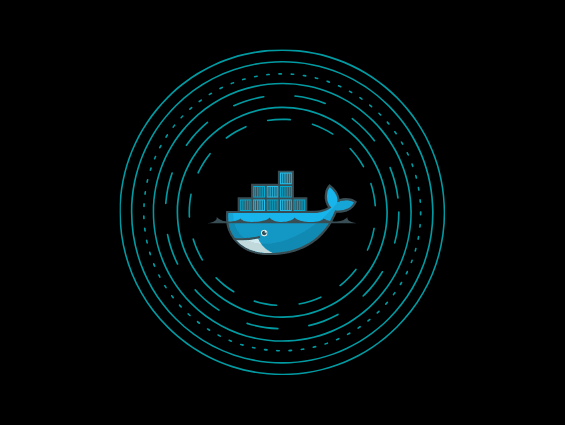 Docker is an open-source platform for developing, shipping, and running applications which enables to separate applications from infrastructure, and software that can deliver quickly. Docker provides many benefits such as runtime environment isolation, consistency via code, and portability.

Containers are the organizational units of Docker. When we build an image and start running it; we are running in a container. The container analogy is used because of the portability of the software we have running in our container. The isolation and security allow you to run many containers simultaneously on a given host. There is no need for an extra load of a hypervisor so containers are lightweight, & it runs directly within the host machine’s kernel.

Difference between virtual machines and dockers:

Docker Engine lets  you to develop, assemble, ship, and run application usage of the following components:

It is a persistent background process that listens for Docker API requests and processes them & manages Docker images, containers, networks, and storage volumes.

An API utilized by programs to engage with the Docker daemon; it could be accessed with the aid of an HTTP client.

A command-line interface purchaser for interacting with the Docker daemon. It substantially simplifies how you manage container times and is one of the key reasons why developers love the use of Docker.

Docker users can engage with Docker via a client. When any docker commands run, the client sends them to docker daemon, which carries them out. Docker API is used by Docker commands. It is possible for Docker clients to communicate with more than one daemon.

A Docker registry stores Docker images. There are public and private registries. Docker has a public registry called Docker hub, where you could also store photos privately.

If you are using Docker Datacenter (DDC), it includes Docker Trusted Registry (DTR).

docker pull or docker run commands, images are pulled from the configured registry.

docker push command, image is pushed to the configured registry.

While working with Dockers, we use the following Docker objects.

Docker implements networking in an application-driven manner and provides various options even as maintaining enough abstraction for utility developers. There are basically two styles of networks available – the default Docker network and user-described networks. By default, you get 3 specific networks on the set up of Docker – none, bridge, and host.

Data can store within the writable layer of a container but it requires a storage driver. Being non-persistent, it perishes whenever the container is not running. So it is not easy to transfer this data. Docker supports the following four options for persistent storage:

Containers offer a lightweight way to isolate your software from the relaxation of the host system, sharing simply the kernel, and the usage of sources given on your software.

You can build and run a .NET Core-based container image using the following instructions:

You can use the docker images command to see a listing of your image, as you can see in the following example.

Package an ASP.NET Core app in the container:

To package an ASP.NET Core app in a container, there are 3 steps.

Step 1: Run the following commands in the Command Prompt,

After that, you will have a functional API. To test it, run this command.

Type below address to get the values from ValuesController –

Here, we do not need a compiler because we will have to build our application externally from our image, integrate all built files in the image, and just use a lightweight image containing the .NET Core runtime Microsoft/aspnetcore to execute our application.

Copy and paste below instructions in your Dockerfile:

Now, we have our image rootandadmin/dockerapp but as this image is not active we should make it alive. For this we need to create a container.

There is a big difference between Image and Container; a container is a process that contains an image and executes it.

To create a container from our image type below command:

Access your API in the browser using the following address:

Containers solved an important problem: how to make sure that software runs correctly when it is moved from one computing environment to another.

Agile methodologies are based on frequent and incremental changes in the code versions, such that frequent testing and deployment are required.

DevOps engineers frequently move software from a test environment to a production environment and to ensure that the required resources for provisioning and getting the appropriate deployment model are in place, and also validating and monitoring the performance.

The initial solution for this was Virtualization. Virtualization allows multiple operating systems to be run completely independently on a single machine.

The container model eliminates hypervisors entirely. Instead of hypervisors, containers are essentially applications, and all their dependencies packaged into virtual containers. Each application shares a single instance of the operating system and runs on the “bare metal” of the server.

Docker is a mature technology that helps you package your applications. It reduces the time necessary to bring applications to production and simplifies reasoning about them. Furthermore, Docker encourages a deployment style that’s scripted and automatic. As such, it promotes reproducible deployments.